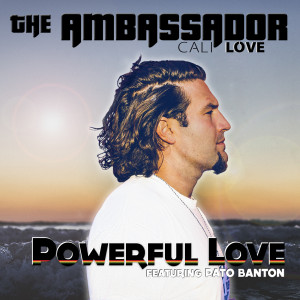 As a precursor to the much anticipated full-length album release “Cali Love”, The Ambassador is releasing a single entitled “Powerful Love,” which drops  July 7, 2015. The track features vocals from GRAMMY nominated artist Pato Banton. The Ambassador is a gifted singer/songwriter, producer and composer that focuses on pairing top notch musicianship and quality songwriting with positive, thought provoking lyrical content in his works.

The Ambassador spent much of 2014 in the studio recording Cali Love, a 17 track album that features various guest artists and musicians, including vocals from David Ornelas of Stranger, and the musical talents of Jah Oil of the Wailing Souls and Tim Pacheco of Psydecar just to name a few. He has teamed up once again with Andrew Mencher of Wisdom and Sound, who engineered, mixed and played the role of co-producer on the record. With the album in its final mixing stages, The Ambassador has decided to release Powerful Love as a single. The full length album will be available for purchase later this year, and will feature a remix of Powerful Love.

When writing the songs for Cali Love, The Ambassador knew he wanted to work with several guest vocalists to highlight specific messages and grooves on select tracks. Having long been a fan of Pato Banton for his positive music and continuous efforts to inspire peace, unity and conscious living, he believed Pato’s inclusion on the track would result in a moving, thought provoking work. He was honored when Pato agreed to come to the studio to record. Following a soundcheck for a show at Solana Beach’s Belly Up, the two met at The Ambassador’s studio in Pacific Beach to lay down the vocals. When asked about recording the track, Pato said “When I was approached by The Ambassador to work on Powerful Love I was immediately blown away by the tone of his voice and the sweet reggae music that accompanied his awesome delivery. I fell in love with the song and feel very good about participating on such a great track with such a beautiful message.”

This says a lot about the song, as Pato has been in the business for many years and has worked with some of the best and brightest in reggae music including UB40, Mad Professor, Ziggy Marley, Burning Spear, Third World, Black Uhuru, Steel Pulse and many others. However, this will not be the last collaboration between The Ambassador and Pato, as Pato stated “The Ambassador and his production team run a smooth operation in the recording studio and I would be more than happy to work with them again in the future!”

The Ambassador was thrilled and honored to have Pato featured on the track; “When writing Powerful Love I immediately had Pato in mind for the tune because his energy, charisma and brand of positivity in both music and lyrics I’ve found inspiring over the years. I find it very much in step with the conscious message and self-awareness that I have tried to foster in much of my own work so you can imagine how stoked I was to link up with him to really bring the song to fruition, to completeness. It’s always an honor and a true pleasure to work with an artist so talented and accomplished yet so very humble and down to earth. Needless to say, I’m proud of the result of our collaboration and I can’t wait to get it out to the people.”

In “Powerful Love,” the song conveys a message of hope and encouragement to those that need an uplifting reminder of the simple joys of living life in the present and lending meditation and contemplative thought to things so often taken for granted on a daily basis, like love itself. At the same time, Powerful Love is a wake up call to all of humanity that clearly urges oneness and unity amongst all races, creeds, and walks of life. The lyrics ask one to focus on what we as humanity have in common and to not allow petty differences to become a deterrent to greater peace, prosperity and equality. It has been said that love conquers all and as this song infers in both its title and chorus, “Nothing’s more powerful than love.”

Although this track is being released initially as a single, you can expect every song on the upcoming album “Cali Love” to contain equally meaningful lyrics written to motivate, inspire and create moments of introspection among listeners, all the while providing easy-to-follow, upbeat rhythms to groove to.

The Ambassador’s rise to musical success first began in Virginia with his band The Seed. The Ambassador toured, wrote and recorded with The Seed as their frontman/guitarist, releasing their self-titled debut album in April 2008, which garnered positive reviews and still turns in steady worldwide sales annually though the group disbanded shortly after the release. In February 2009, The Ambassador decided to head west and plant new roots in sunny San Diego, California.  After his 2009 EP release titled “The Ambassador Presents…”  and the Haiti Relief Benefit EP “Sunshine” in 2010, The Ambassador’s first full-length solo album entitled “New Roots” was released in 2011. It was nominated for World Music Album of the Year at the San Diego Music Awards and Album of the Year at the Virginia Reggae Awards, and was positively received by both radio hosts and music critics alike.

Since residing in southern California, The Ambassador has performed and recorded with some of SoCal’s finest reggae/dub musicians, attributing to the “fuller sound” that is prominent on both the New Roots (2011) and the upcoming Cali Love album releases. Having just wrapped up the Caravan2Cabo tour with fellow SoCal artists Hirie, Tomorrow’s Bad Seeds and The Broken Stems, The Ambassador is now focusing on the upcoming release of his second full length album “Cali Love.”